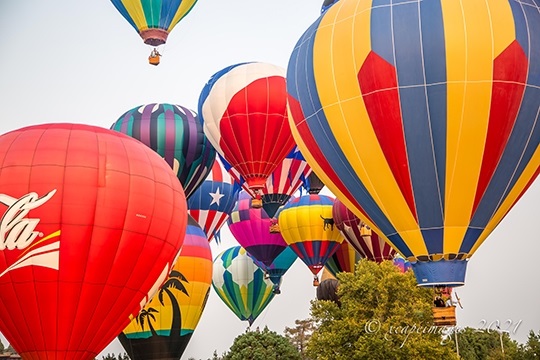 Photography is my distraction.

Recently I attended the Spirit of Boise Balloon Festival: two, rather cool, early mornings, starting in the dark, and ending with a sky full of color. It is interesting, sometimes different events cause you to think on topics you have been lingering over from a different angle.

One of the greatest issues in financial planning is getting the emotion out of the actions: look through the focal point of discussion, concentrate on the goal, make a decision, and take action, based on rational thinking.

When I was home, proofing my photographic images, a clarity struck me about part of the events of that morning. The planned launch was intentionally slow and grouped. At a specific moment all the pilots began inflating their balloons. It was exciting to watch. As the balloons took shape and lifted, it became apparent that some had not left enough space between themselves and the balloon next to them. This was easily remedied but the balloonist had to fully inflate, then the ground crew would shuffle off to one side. Some time passed, and everyone was ready to go. Now, with the count of three, they all began slow burst of burns to lift just enough to start into the air. It was a wonderful ten minutes, or so, as they all began moving across the field and into the air. The only problem, … they sort of piled up against the trees as they tried not to lift too much but enough to create the slow rising effect. As all this occurred, there was more jostling, and eventually they worked their way down field. A few of the balloonists took on greater burns, and they lifted away from the crowding. While others intentionally landed down field allowing the spectators to come over and view the balloons and talk with the pilots.

From all of this I concluded these points with regards to financial planning:

Financial planning and goal setting requires immense focus, and, a willingness to ignore the crowd.

Call me, let's talk about your plans.